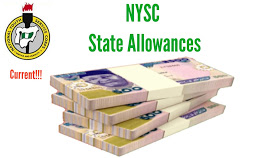 STATES THAT PAY AND DOESN’T PAY NYSC CORPS MEMBERS, AS AT THURSDAY, 9TH MAY 2019

As NYSC 2019 Batch B registration draws closer, here is the full guide on the states that pay extra allowance apart from the federal government ₦19,800 allowance.

Please note that for you to be eligible to receive this allowance in the states that pay, you must be serving in a public establishment. Those serving in private establishments can also be paid, only with negotiations with their employer.