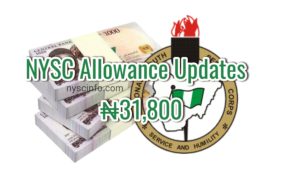 There has been rumour of some Corps members being paid N31,800 NYSC allowance in Lagos, Katsina, Abia and Osun States. We, hereby, categorically state that it’s a fat lie coming from mischievous persons who want to deceive and scam members of National Youth Service Corps (NYSC).

Some people usually come up with lies about N31,800 every month when corps members’ hope is high towards the month end. They have even gone to the extent of spreading fake screenshots of the alert such as the one below👇 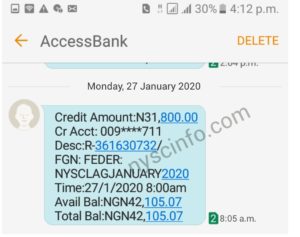 This allawee screenshot is FAKE!

Meanwhile, we urge all Corps members to keep their hope alive as we await for government to fulfill their promise.

READ ALSO:  NYSC Allowance For All States In Nigeria (2020)

The truth of the matter is that ‘NO’ Corps member has received the said N31,800, and FG has not started paying the minimum wage at the time of publishing this post.

Please, note that Corps members allowance is still N19,800. Ignore the rumor that NYSC has started paying the N31,800.

The screenshot of purported N31,800 alert that is trending online is a Photoshop. Please, dismiss it!

Recall that the National Youth Service Corps, NYSC, has dismissed as fake news reports making the rounds on social media that serving corps members will be paid N31,800. As monthly stipends following the signing of the new minimum wage into law by President Muhammadu Buhari.

A Deputy Director at the NYSC headquarters Abuja, Eddy Megwa told Vanguard on Wednesday that the federal government is yet to inform the Scheme of any increases in the stipends of serving corps members.

He stressed that though the NYSC does not pay corps members directly, the federal government will inform the Scheme of any increases before a stipend figure different from the current N19,800 is made available to the public.

He said, “The NYSC does not pay corps members any sum of money directly as stipends but the federal government does.

“Until the government is ready to implement the N30,000 minimum wage, we cannot say what corps members will earn for their service to the nation.

“Disregard any figure you find making the rounds on social media. When the federal government is ready, it will inform NYSC and we will announce it to corps members through official channels.”