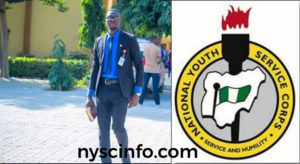 Recall that yesterday, we posted about the abduction of an NYSC Corps Member named Abraham Amuta by the dreaded Boko Haram sect in Borno.

The report was confirmed by the Borno State Coordinator of the National Youth Service Corps (NYSC), Mr Rabiu Aminu, on Monday in Maiduguri.

In an earlier report gathered on social media, the corps member was abducted along with a pastor with the Living Faith Church, in an attack by the insurgent in Maiduguri.

The coordinator however stated that the corps member was traveling with the pastor and other members of the church.

“The church claimed that the corps member was abducted alongside his pastor.

“NYSC deploys corps members to only four of the 27 local government areas in the state.

“For any corps member to travel, he has to apply through proper channel and this involves a formal request from his employer, through the zonal inspector and channel to the state coordinator, where we look at it, endorse or approve the request.

“It was unfortunate that the said corps member travelled on his own; we have been having a sleepless night over the issue because he is under our custody.

“We visited the Church, and the Commissioner of Police called us on Friday over the incident and assured us of their total support to address the situation,” he said.