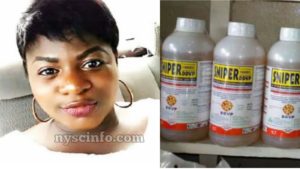 A female member of the National Youth Service Corps, Ayomikun Ademorayo, who was serving in Osun State died on Sunday after she washed her hair with an insecticide (Sniper) to eliminate stubborn lice on her head.

Nyscinfo.com learnt that Ayomikun applied ‘Sniper’ in her hair to eliminate lice in preparation to her upcoming birthday celebration on 18th July.

Ayomikun, who was an orphan and a prominent member of the NYSC state volleyball team, applied the insecticide to her hair on Sunday afternoon and became unconscious few minutes later, and was rushed to a private hospital in Osogbo. But died on the way to the hospital.

READ ALSO:  How Pastors Make Money From their Congregation

Eye witness said; “Ayomikun loose her hair in order to make a new style for her birthday, which is in 10 days’ time. She was preparing for July 18. She had bought a new clothe and bag for the purpose. She discovered that lice had invested her hair.

“So, on Sunday afternoon, she just applied Sniper to her hair to eliminate the lice. Shortly after she did that, Ayomikun lost consciousness and was immediately rushed to a private hospital in Osogbo. But she died before she could get to the hospital.”

Ayomikun studied Human Kinetics at the Tai Solarin University of Education, Ijebu-Ode, Ogun State, she lost her mother in June this year, while her father died some years ago.

READ ALSO:  How Much is the Corps Members Arrears?

She was said to be the breadwinner of the family and had younger siblings in secondary schools.

Reacting to the incident, the Public Relations Officer, NYSC in the state, Funmilayo Okundaye, said she heard the story but yet to get the full details, however, she confirmed the death of the corps member.