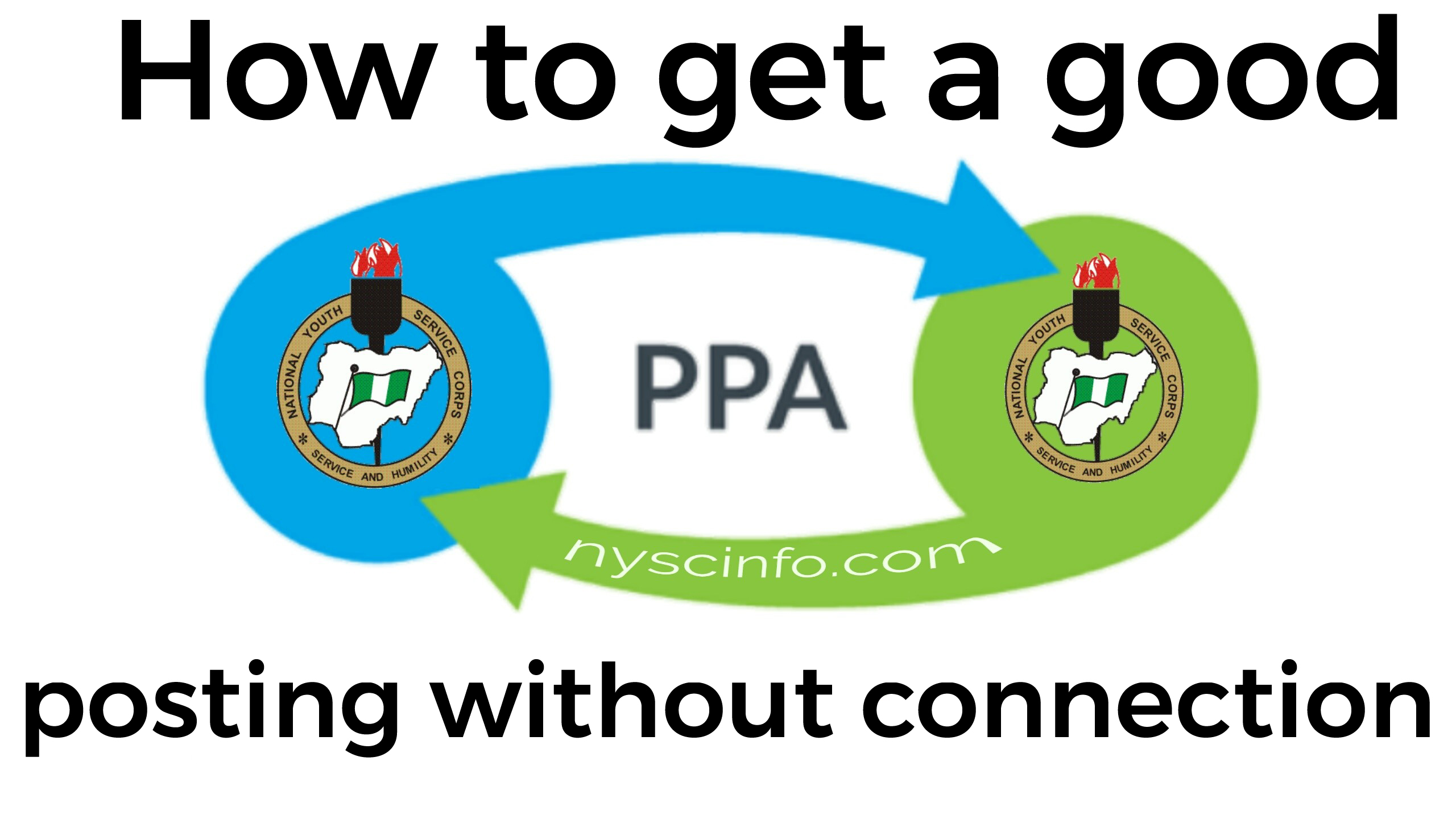 How to get a good PPA posting without connection during your service year is relatively easy, but you’ll have to seriously work hard for it, or else you’ll lose this exciting opportunity.

First of all, What is a PPA- PPA simply means, Place of Primary Assignment, it is a place where you’ll be posted to work or render a selfless service throughout the entire mandatory one year.

In July 2018, when I was in the orientation camp in Iseyin, Oyo state, I’d learnt lot’s of tricks and secrets about NYSC posting and it’s likes, and this article will really go a long way in guiding and preparing you of what’s ahead.

The compulsory one year National Youth Service Corps (NYSC) is a time to prepare yourself for what’s ahead in life, you might even be retained in your PPA, and you wouldn’t want to be retained in a bad place that you might not even like to stay back after service.

Most people like to be posted to good places where they’ll get proper work experiences and earn extra allowances, apart from the Federal Government N19,800.

Some of the good postings available in a state are:

Ways on how to get a good PPA posting without connection:

NOTE: For some of these tips to work, do ensure that you are in the orientation camp on the first day of the camping or try arriving a day before the camp opens, they’ll surely allow you.

1. Join a Religious Group: If you love the things of God, this is a great opportunity for you, whilst you’re in the NYSC orientation camp, you should try to join one of the NYSC recognized religious groups and strive to be an active member that every one will know and recognize.

If you’re an active member of any of the above groups, it’ll be easy for you to get posted to a very good PPA, only if you do your work well.

2. Join the OBS Crew: OBS stands for Orientation Broadcasting Service. It’s in every camp, because they are in charge of broadcasting news within the camp and also responsible for coordinating camp social activities.

Because of the high demand among Corps Members to join the OBS crew, some camps usually hold auditioning or interview before someone can become a member.

Remember that you need to be in camp, a day before resumption of camping or on the resumption day, to have better chances of joining the OBS.

Every Corps Member is eligible to join the OBS, it’s not only meant for those that studied mass communication or related courses.

Whilst in the OBS, you might be among those that cast news, report news, announce missing items, host a camp radio program etc.

Another benefit of joining OBS, is that, you’ll choose whether or not to join in the camp parade, morning exercises, drills etc.

As a member of the OBS in the orientation camp, try to be very active, so as to be recognized and made one of the members of the Editorial or Publicity CDS.

All the members of the Editorial or Publicity CDS are automatically posted to the state capital.

If you’re made the President of the Editorial or Publicity CDS, congratulations you’re a boss.

In NYSC, this Editorial or Publicity CDS is the King of all CDS, because they are in charge of producing the monthly NYSC newsletters, periscope, the NYSC end of the year magazine, Radio & Television station programs, sensitizing schools etc.

The Editorial or Publicity CDS work in collaboration with the NYSC Press and Public Relation Unit (PPRU) and they are the mouth piece of all other CDS and the NYSC, because they’re the ones that’ll publish the events of the other CDS.

Members of the Editorial or Publicity CDS are mostly posted to Radio Stations, Television Stations, Newspaper houses and other Media houses.

3. Join the Camp Clinic: This  group of corpers are mostly those that studied medical related courses.

They usually assist the trained and
certified doctors in camp.

Most times, they’re in charge of interviewing the Corps Members that applied for relocation and redeployment in camp.

Joining the camp clinic, gives you a great opportunity in getting posted to a good PPA.

4. Join the Band Group: NYSC band is a very nice group to join in the NYSC camp that’ll give you great chances of getting posted to a good PPA without connection.

If you’re good in singing, clapping, beating drums, playing flute, trumpet, piano etc., then this group will really be good for you.

During the camp parades and swearing in, the camp band group provides live entertainment for the corps members that are marching.

When they’re finally posted to the main towns and cities, they’ll beat the drum during the Independence day parade and on special celebrations in the state.

5. Become a Platoon leader: Platoon is a group that every Corps Member is assigned to.

READ ALSO:  How To Check Your NYSC Posting Online 2020 Batch A

For instance, if your state code is 1740, you’ll automatically become a member of 10 platoon.

So, there are 1-10 platoons in camp and each of them have leaders.

Platoon leaders are mostly elected in the orientation camps and they’re those that are in charge of coordinating their fellow Corp members in the platoons.

They fix meetings within the platoon, they also organize and supervise the Corp members for various social activities within the camp.

They have posts, such as President, Secretary, Vice President, Treasurer, Director of Socials etc.

They are mostly posted to good PPA, because they’re known within the platoon and their platoon officers recommend them for good postings.

Being just a Platoon leader won’t just give you good postings, you’ll have to work very hard whilst handling your office. Also be agile at all times.

6. Join the Quarter Guard: These are set of Corps Members that are trained to mount the quarter guard chamber.

The Quarter Guard is situated immediately after the orientation camp gate.

You need to be in camp early to join this group, since they starts training immediately from the first day, their first work is usually on the swearing-in day.

Immediately you join this group, your posting to a better place is guaranteed for sure.