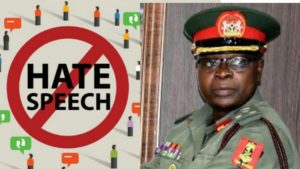 According to Shuaibu, Corps members should be agents of National development, rather than promoting disunity among the different ethnic groups.

“Corps members should tread with caution. The social media should not be used to propagate disunity in the country.

“Do not be an evangelist of hate speech, rather be ready to render selfless service for national development and transformation”.

The NYSC Director-General also urged corps members, particularly the current set in camp, to contribute meaningfully to their host communities in their places of primary assignment.

“Identify the challenges facing your host communities, see opportunities in them , source for ways to leave the place better than you met it”.

“In recent times, corps members have been involved in motor accidents, therefore, it is mandatory to take permission from the appropriate authorities before embarking on any journey.

“Henceforth, all the keys to the buses (vehicles) of the religious bodies, NCCF, NACC, and MCAN shall be in the care of the State Coordinator and approval sought before their usage.”

READ ALSO:  How To Check Your NYSC Posting Online 2020 Batch A

The NYSC boss said that corps members, as nation builders, must refrain from all forms of criminal activities, such as cyber-crime, robbery, sexual harassment and other social vices.

The director general later took a tour of facilities in the camp in company of the State Coordinator, Mrs Emmanuella Okpongete, and other NYSC officials.

We at nyscinfo.com urge every corps members to always adhere to the DG’s advice. NYSC was established to foster unity in Nigeria, and you are the symbols of unity.

If you have question, use the comment section below.