The Sunday morning road accident that claimed the lives of the two National Association of Catholic Corpers (NACC) members in Katsina State, occurred at Gobirawa village in Kankara local government area of the state.

The vehicle in which they were traveling with, had plate number MAN 45 AA with inscription “CORPERS FOR CHRIST” and has green metallic colour. 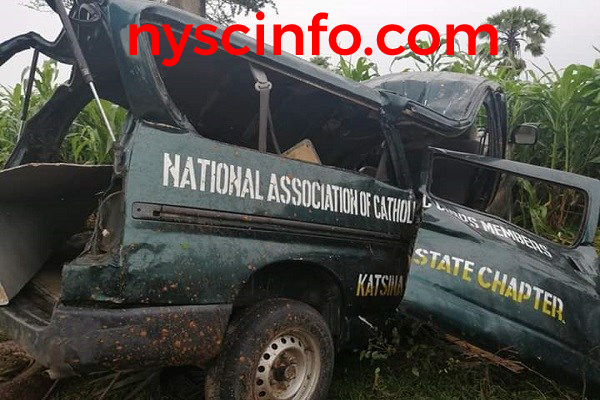 Governor Aminu Masari, who was travelling to Danja when he got to the accident spot, directed that his pilot vehicle be used to convey the corpses of the late corps members and their other colleagues back to Katsina.

One of the surviving NYSC member told Governor Masari that they were on their way to attend a mass wedding at a Catholic Church in Funtua and the heavy rain made the road slippery that when the driver was trying to apply brakes, the bus was swept away and it hit a nearby tree.

The Governor was on his way to Danja to attend the burial rites of Alhaji Saleh Danja who had also died in a ghastly road accident on Saturday at Tsanni in Batagarawa local government area of the state.

Late Alhaji Danja aka, Saleh, was one of the close people to Governor Masari.