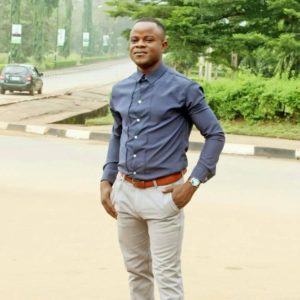 A student at the Department of Hospitality Management Technology, Lagos State Polytechnic, Ezekiel Mayowa, has killed himself after he was reportedly dumped by his girlfriend, who is currently a Nigerian Corper.

DOWNLOAD AND WATCH HIS VIDEO, BEFORE HE KILLED HIMSELF

The corpse of the 34-year-old part-time student was discovered in his residence at Eyita, Ikorodu, around 5am on Friday. He was said to have taken a poisonous substance suspected to be Sniper.

Moments before he committed suicide, Mayowa posted a video on Facebook, explaining why he took the decision.

In the three-minute-18-second video, Mayowa bemoaned how his lover, one Bolaji Temmy, whom he had dated for nine years, ended the relationship after she commenced her National Youth Service Corps programme.

Amid sobs, Mayowa, who identified himself as the president of his department’s students’ association, lamented that he had made several efforts to reconcile with his estranged lover, but to no avail.

He said in the video, “I will advise the Federal Government to scrap NYSC because that is where I lost my joy; my love. I am not a bad boy; I am not wicked. Since my woman got into that (NYSC) camp, everything changed. Since last year, we’ve not been able to resolve anything. My woman is now taking an advantage of the mistake I made three years ago to leave me.

“I am going, I need to go, Bolaji Temmy is the woman I’m talking about. I need to go. To all the boys out there, please try to make money before you date any woman. I’ve tried my best. I’ve tried all I could. We’ve been dating for nine years and now she is leaving. I hurt her in the past, but I’ve appealed to her. But she insisted on leaving me.”

He appealed to his mother and colleagues to take heart, noting that he had chosen his own path.

I will miss my mum. Mummy, please don’t cry. I have chosen my own path…I will miss you all. Your president is going…I am going. I am going now. I am empty. Bye,” he concluded.

He said when interrogated by the police, the girlfriend said Mayowa was fond of beating her and that they were together shortly before he took the poison.

Elkana said, “The police received information that a 34-year-old part-time student at Lagos State Polytechnic, Ikorodu, drank a poisonous chemical identified as Sniper, following a misunderstanding between him and his girlfriend, Olokodana Bolaji, 24, who was also a graduate of the same institution.

“He was rushed to hospital by his neighbors following an alarm raised by his girlfriend, but eventually died. In the statement of his girlfriend, she told police investigators that she and the deceased dated for nine years and that the deceased was fond of beating her.

“She said while she was with the deceased in his room, they had a quarrel and he, as usual, resorted to physical violence. She said she ran to the restroom and upon her return, she found him gasping for breath with an empty bottle of Sniper beside him.”

The PPRO stated that detectives from the Homicide Section of the State Criminal Investigation and Intelligence Department, Yaba, visited the scene of the incident, adding that the corpse had been deposited at the Ikorodu General Hospital mortuary for autopsy.

“Investigation is ongoing to determine whether it was actually a suicide case or murder,” Elkana added.