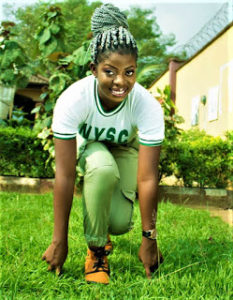 Miss Somtochukwu Okonkwo is an NYSC Corp-member serving in Ifo Local Government Area, Ogun state with the state code, OG/18B/1361. She is a graduate of Chemistry Education from Nnamdi Azikwe University, Awka, in Anambra State. She is a writer and a potential tourist.

For her NYSC year, she was posted to Ogun State and she is carrying out her primary assignment at the ‘Crown of Grace Academy’ Ajowa in Ifo Local Government. She recently held a Spelling Bee competition as her Personal Community Development project for her NYSC year 2018/2019. In fulfillment of a promise she made to herself on her first day at her place of Primary Assignment (PPA), when she noted that before the end of her service year, she wanted the community to feel her presence positively.

As a class teacher, she observed that most of the students in her class and within the school had the challenge of reading comprehensibly and she started by helping to make them read more and pronounce words for proper coordination, then the idea for a proper motivation came in, she held on the idea for a spelling bee competition for the students.

A spelling bee is a competition where contestants are asked to spell words in a round-robin format, where the person that made it to the last round goes home with an award or a prize.

In her brief introduction on the day of the first conduct, she explained that, she believes strongly that the Spelling Bee will help bridge the gap between forming a good reading habit and achieving a noble academic excellence. It will help build knowledge of how words connote to sounds which are meant to be pronounced for reading to be achieved. As well as help to promote good reading habits. It will spark up the drive for academic excellence, help encourage and appreciate hard work and diligence in students, help to create an atmosphere of competitiveness among students and help the students to learn how to spell, pronounce and read effectively.

Branded exercise books for the program

The competition kicked off on May 17th, cutting across 15 secondary schools in Ifo that were invited and it was divided into two categories: The Junior and the Senior category. 7 schools made it to the final.

On 6th June, 2019, the final stage of the competition took place with seven secondary schools, sixty students and their teachers.

Branded school bags for the program

At the finals, Junior category, representatives of seven schools competed and at the end of what happened to be a tough session, Odunyemi Samuel from Ireti-Olu Model College, Ifo emerged the winner while Ajala-Teslim from Al-lateef Group of Schools, Ifo and Koledafe Simisola of Bennel School, Ifo were the first and second runner-ups respectively.

Certificate of participation given to all participants

In the senior category, seven representatives of their schools battled with their spellings and Busari Azeezat from Ireti-olu Model College emerged the winner of the Spelling Bee Competition, with Olaleye Roqeebat of Al-lateef Group of Schools, Ifo and Ogunsola Gbenga of Jiboh Bright Model School, Ifo became the first and second runner-ups respectively.

A student receiving her certificate of participation and books gift

All participants in the competition got a certificate of participation, while medals of honour were given to the six outstanding spellers for singling out themselves as great achievers. The two winners got a customized school bag, novels, motivational books and educational materials. The runner-ups received novels, books and educational materials.

Some books donated by Dr. Raphael James to Miss Somtochukwu for the program

The schools, that the winners represented were honoured with a plague and this was the climax of the occasion as the two winners (junior and senior category) were from the same schools. All the schools that participated in the competition received new books for their libraries and all the sixty students went home with a customized exercise book and a pen.

Some of the students during the final

The competition was graced by some dignitaries who has love for education, including Dr. Raphael James, the Director General of the Center for Research, Information and Media Development, CRIMMD Lagos; there was also the Ifo Local Government Inspector of NYSC – Mr. Emmanuel Eko, Mr Shonde N. Olawale ACA (Olayorker), a philanthropist with a good heart, Mr. Kolade, the Media aide to Hon. Olakunle Oluomo, Deputy Speaker, Ogun State House of Assembly Ifo constituency 1 and about a dozen Corps members serving in Ifo Local Government Area, were all out to support their colleague. In fact one of the dignities, Dr Raphael James was honoured with an award by the youth Corp member.

Somtochukwu with her fellow corp members

When asked how she was able to raise fund for the community project, she explained that she saved her NYSC allowance of N19,800 for 5 months and she solicited for support from well-meaning Nigeria. Though she explained how discouraging it was, because people rarely supported. She explained further that the disappointment and discouragement did not deter her from following her passion to improve the life of younger Africans.

A Runner up with gifts and medal 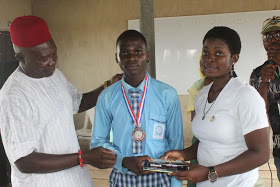 A Runner up with gifts and medal

The winner of junior category with his medal and gifts 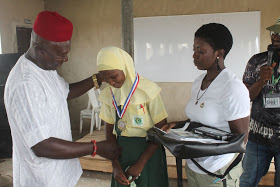 The winner of senior category with her medal and gifts 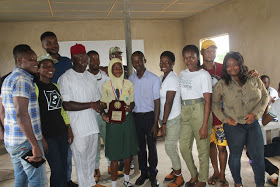 Winner of the senior category representing her school with her school teacher, corp members and Dr Raphael James who presented the award to the school

She deserves a recognition for her project to serve as a motivation to future NYSC corps members that’ll be posted to remote areas.