Have you been looking for means to contact the Director General of the National Youth Service Corps (NYSC)? In this post, I will show you how to communicate directly with the NYSC DG.

Do you have anything that you would like to let the NYSC Director General know about or are you looking foward to  talk business or anything else with him? If “yes” then this post is for you.

Shuaibu has in several occasions demonstrated his love and kindness toward the NYSC members. He assumed office on Friday 3rd May, 2019 after his appointment as the NYSC 18th Director General.

Until his appointment, Shuaibu was working at the Nigerian Army University, Biu.

READ ALSO:  NYSC Allowance For All States In Nigeria (2020)

Brigadier-General Shuaibu Ibrahim replaces Major General Suleiman Kazaure who was appointed NYSC Director General on April 18, 2016, and had served as the 17th DG of the scheme until his redeployment to the Nigerian Army Resource Centre on April 26, 2019.

Brig. Gen. Shuaibu has once said that he would rather die than to lose a Corps member, and he meant his words.

To make communication with Corps Members easier, the Director-General released an official email address where Corps members nationwide can discuss matters with him.

How To Communicate Directly with NYSC DG (Brig. Gen. Shuaibu)

If you have anything you’ll like to discuss, report or inform direct to the NYSC Director General, just send it to his official email address: sibrahimdg@gmail.com.

This method was officially announced by the NYSC management.

See the official announcement below:

This is to inform Staff nationwide and Corps Members that you can reach the Director-General through this Email Address sibrahimdg@gmail.com

In a bid to fulfill the open door policy of his administration and ease of communication flow.

Kindly note that mails will be treated with utmost confidentiality.

READ ALSO:  How to check your NYSC Relocation Status & how to print it out 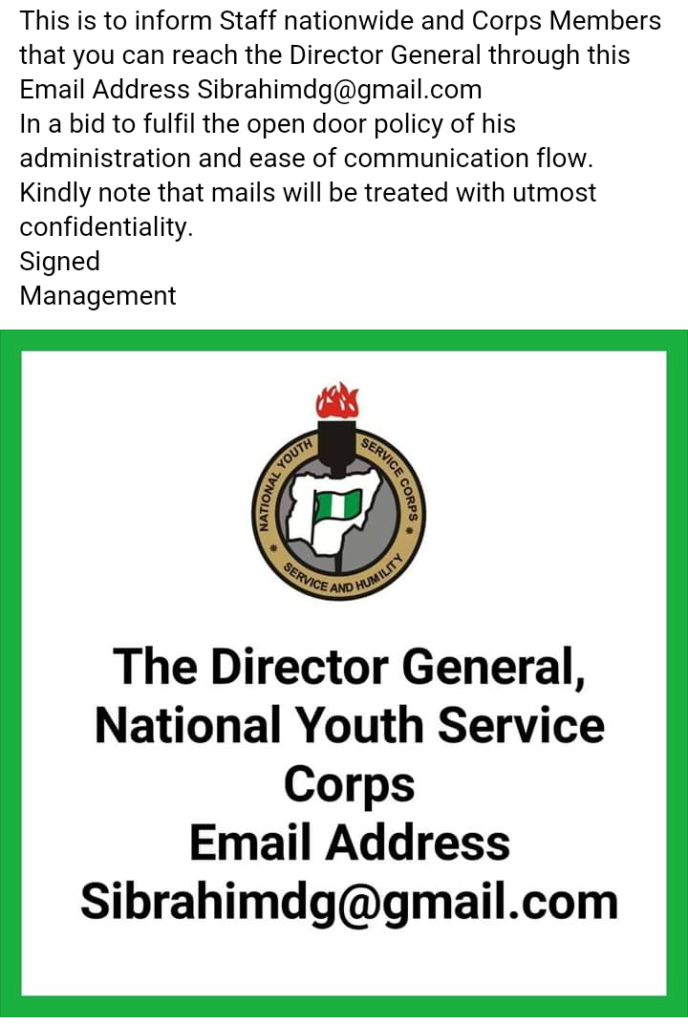 Humphery is a life coach. He served in Abia State, and has been NYSC info ambassador since 2017. He is knowledgeable enough to guide you. Just feel free to contact him and keep following this blog for his updates.
← Previous Post
Next Post →