Nollywood is a Nigeria’s number one movie industry which has grown tremendously in the past decades. In this post, you will learn how to easily become Nollywood actor/actress. 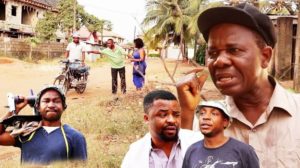 The existence of movie streaming platforms such as Iroko, Netflix, YouTube and many others have promoted the success and fame of nollywood actors as nollywood movies are viewed everywhere around the world.

A talented actor can easily build his/her movie career in nollywood. So if you are talented consider yourself a nollywood celebrity very soon.

You will enjoy many benefits as a celebrity such as a huge fan base and endorsement details, paid acting gigs etc.

This post will give you insights on how to become a movie actor/actress in nollywood industry.

All the notable actors in nollywood such as Olu Jacobs, Kenneth Okonkwo, Kanayo .O. Kanayo, Rita Dominic, Genevieve Nnaji, and so many of them have built a successful career in nollywood.

Now the question is, how can you become a nollywood actor to let the world discover your talent?

How To Easily Become Nollywood Actor/Actress

Below is how to become an an actor/actress in nollywood:

Your movie collection should contain all the relevant acting work you have done so far. This is the first step to become a nollywood actor/actress.

Creating a collection of your acting performance will help you a lot when you go for acting auditions, talent agency or contract filmmakers and movies producers.

This collection of movies you have featured will help filmmakers, producers to rate your acting capacity. This acting collection is important in your journey to become an actor/actress to get acting gigs.

Auditions are where you can meet with actors, producers, directors and host of other people in nollywood. If you want to be a successful nollywood actor/actress you have to attend auditions and take part in it.

READ ALSO:  How to convert your CV from Microsoft Word to PDF

The interesting thing is that you get to display your prowess in acting. If your acting skills are measured up to average you can be selected for a role in any movie in nollywood. Attending auditions is an opportunity to meet with top people in the industry.

Making connections with other actors/actresses at auditions is very helpful too. They might alert you on other auditions you may not know about and catching the role on such auditions could be your stepping stone in nollywood.

Building a good relationship  with a director or producer could get you another acting gig in future if you eventually did not get the role you auditioned for. These are the good things in going for auditions.

The advantages you get when you join a Talent agency are numerous. There are several talent agencies for actors which you can join especially in Lagos which is where most nollywood veterans such as producers and film makers reside.

Joining a Talent agency is an important step in becoming a nollywood actor.

A Talent agency will help you secure acting jobs in nollywood because they have the necessary information, knowledge and connection. Talent agencies tend to know about auditions before anyone else.

4. Display your talent on Social Media

Social Media is a good tool which you can use to display your talent for people to see. These Social Media have turned many comedians into nollywood celebrity. Facebook, Instagram, YouTube, Twitter, Snapchat, etc.

Upcoming artist as well as comedians uses these media to display their acting career. Comedians like Chief Imo, Akpan and Odume, Broda Shaggi and Wofaifada, MarkAngel etc. Have managed to level their huge presence to the screen.

READ ALSO:  How To Get Job In Canada From Nigeria - Apply Now!

Chief Imo is a funny comedian who has starred in many movies on nollywood, Broda Shaggi is a comedian who is popular on Facebook and other social media who starred in the movie, The Bling Lagosians.

Wofaifada is also a comedian who starred in the African Magic sitcom, Flatmates.

Creating an account on social media platforms would help to back you up in your quest to become a nollywood actor.

Use the same name or comedy name on all social network so that people can know you and find you easily. Use a name that is catchy and easy to remember.

Then go ahead and display your skills in acting on social media whenever you want.

You can make skits with other aspiring actors/actresses. This can help you get a major acting gig in nollywood if any of your videos go viral on the internet.

It can also be an open door for you  to connect with  movie producers, film makers as they can easily notice you on these platforms.

5. Have a Personal Brand

Make sure you craft a personal brand that talks of your strength as an actor/actress. You can create a small cut for yourself in the movie industry.

A personal brand is very important if you want to become a nollywood actor/actress. This will help you get certain roles in nollywood.

Crafting your own brand is a process where viewers can know you for a particular acting strength. This will help your acting career greatly.

For example, Chief Imo is known for his jest of someone which is usually in the character of Sister Maggi. When you form a personal brand which you are known for you can then branch out into more challenging roles as time goes on.

READ ALSO:  CV Writing Services in Nigeria - We help you write your CV

6. Get Close to Movie Producers and Filmmakers

You can search for movie producers and Filmmakers via their social media accounts to reach out to them.

They have an email address where you can get to them. There are also other links through which you can get their contacts and draw close  them.

There are many film academies founded by different nollywood actors/actresses that offer acting seminars.

Acting seminars are very important for aspiring actors/actresses in nollywood. It is very important that you constantly master your skill. This is because nollywood is a very competitive industry therefore, you have to attend acting classes to upgrade your acting skills.

The entertainment industry is fast becoming a sure path to career success and fulfillment. The National Bureau for statistics in 2004 reported that nollywood employed over 250,000 contributing 1.4% to the GDP.

Actors/actresses in nollywood are becoming more recognised in the international scene. Gone are the times when being an actor/actress was frowned upon.

If you become a nollywood actor/actress, you stand good chances to enjoy many opportunities. Nigerian movies are now displayed at film festivals globally and winning several international awards.