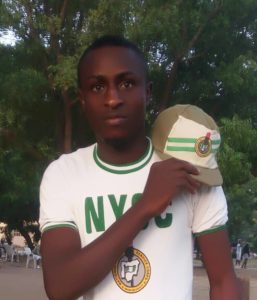 NYSC, HOW FAR, SO FAR

The National Youth Service Corps is a program that has been designed by the federal government of Nigeria to comprehensively expose the brightest young minds in the country (graduates of tertiary institutions) to the diverse cultures, environments, traditions, religions and work habits with a view to developing and encouraging common ties among  them and to promote National Unity. It is a National Program that ceremoniously rounds off a graduate’s course of study in Nigeria.

In my village for instance, if you go to school without wearing the NYSC uniform someday, they will conclude that you didn’t go to school and that you only went there to waste your parents resources. (Lol)

The assertion that those who do their registrations on time will be posted to their choices states drove me into spending a sleepless night at the cyber cafe to make sure that I register on time so that I could be posted to any of my most preferred states. This I achieved by starting and completing my NYSC online registration between 12 to 1:00AM the night the site was opened. I was filled with plenty of excitement after completing my registration since I was able to pick Lagos as first Choice, Abuja as Second Choice, Anambra as third choice and Kano as fourth choice. I was so confident that I was going to be posted to either Lagos or Abuja which were my first and second choices respectively. I couldn’t wait to behold the date slated for the printing of Call-up letters. I was so curious to know where I was suppose to spend my next 12 months away from my place of birth.

Lo and behold, the slated day for the printing of Call-up letters came and the entire me was fixed in a mixed aura and in an inexplicable apprehensive excitement. At about 10:00AM in the morning, I brought out my phone, opened the portal to check if the letters are ready, but nothing came up. I stayed logged in on the site and kept on refreshing until it was around 12;00PM in the afternoon but nothing still showed up. I almost gave it up and concluded that the Printing of Call-up letters have been extended when eventually I got a call from a friend that they just uploaded his. Without wasting any time, I immediately opened the site again and saw that the long awaited CALL-UP LETTER link was active. I tapped on the link and the letter opened. I was shocked to my marrows when I saw something different from what I had expected. It was not Abuja, not Lagos neither was it Anambra. Brothers and sisters in the race, It was KANO instead. Even though I had picked Kano as my last choice, it was the least of my expectations and I never thought it was going to show up.

But then, I had no option than to accept the choice since I couldn’t change it. I called my parents and informed them about the development but from the sound of their voices, I could deduce that their excitements had shortfalls. Most of my friends who were closed to me and who where informed of the development even though most of them have not had the opportunity of crossing the shores of CROSS RIVER had the guts to tell me that Kano was one of those worst places that anyone could serve. Although I felt a little nervous, I was not deterred by their negative assertions since I had a God who chose Kano for me.

The longest journey of my life should begin the next day and I had practically gotten everything set for it – I got prayers from my mother and advice from my dad. My mother looked at my face very closely and started shedding tears as if I was embarking on a journey where they will be no return. I was bold enough to say within me, “Insha Allah, Nothing is going to happen to me” I started my Journey from Ikom, Cross River State at about 8:00AM in the morning and got to Abuja in the middle of the night where I met some other Prospective Corps Members (PCM) most of whom were heading towards the North Western states (Kano inclusive). We all agreed to spend the night at the park to continue the journey the next day. To cut the journey story short, I got to Kano Town at about 3:30 PM and boarded another bus to Karaye Local Government Area where the camp is cited. In less than 2 hours, we were able to hit Kusala Dam (The community where the Kano State Permanent Orientation camp is sited). The camp looked catchy, green and clean. It is located very close to one of the biggest dams in Kano state and it is a sight to behold.

In less than an hour that same day, I started and completed my camp registration, got my tag/code, NYSC Kits, a bed and a bed bunk/space in the hostel. For the very first time in my life, I met a complete country in my hostel room. As a Cross Riverarian, I met the Yorubas, Housas, Igbos, AkwaIbomites, Fulanis and a whole lot of people from other places. We all related very harmoniously and lived like brothers. We shared so many things together including jokes, food, kits and lots more. For the three weeks we spent in the camp, it was an experience filled with plenty of excitement and good memories.

In camp for instance, you do not live the freedom laden kind of life. You don’t decide when to go out of the hostel, you don’t use the market at you convenience, you sleep when the rule says you should sleep and wakes up when the rule also asks you to do so. Every activity has time and the time must be strictly adhered to. In camp, you will be fed for three times on a daily basis (morning, afternoon and evening) with an NYSC customized meal ticket. You may also decide to patronize the foods prepared by ‘Mami’ restaurants any time you decide not to eat the ones prepared by NYSC.

Very interestingly, activities, program and competitions in camp are carried out on the basis of groups otherwise known as PLATOONS. In it, the very last number of a particular corp member’s tag defines the platoon where he or she is supposed to belong to. But for those in Platoon 10, the figure ZERO (0) is used as a means of identifying them. On the basis of these platoons, corps members take part in activities ranging from daily morning devotional exercises, early morning drills, match passes, football competitions, volley ball competitions, debates, dances, talent hunt competition, beauty pea-gents, track and fields, carnivals and a whole lot of others.

One very significant aspect of the camp activities were the lectures ditched out to corps members almost on a daily basis. These lectures according to the camp officials were meant to prepare the corpers to face the real realities of their service year out of camp. (But I can authoritatively tell you that almost 70% of corps members sleep during these lectures) Of note is the SAED program which according to them was meant to enable corp members to acquire skills which will help in sustaining them during and after their service years. Here, corps members are given the opportunities to pick any skill acquisition program of their choice which was slated to last for a period of 5 days or so. While some persons took very serious, most of us never saw anything too special about it. I personally saw it as an avenue to have plenty of rest and sleep. (Don’t blame shaa)

The camp activities and programs lasted for a period of three weeks  and during this particular period in question, I never bothered myself with the issue of having any girlfriend. Not because I originally never wanted to but because the little money I had could barely solve my needs. I never wanted to drag an innocent girl into my financially miserable life.

After three weeks of camping, I was posted to a private firm (SIM CONSULTING AND ASSOCIATES) located in the heart of Kano City. One thing I like about Kano State NYSC is that majority of the  corps members are posted to establishments in line with their courses of studies and almost 80% of these said corps members are posted to its city center. I reported to my Place of Primary Assignment where I was gladly accepted since what they did there was very related to my course of study. I finished my documentation for posting and traveled back to my village for the two weeks brake.

OMO!!! come and see the latest corper in his village flirting his seven over seven just to shame his enemies and those who thought I was not going to make it to that level. The expression on the face of my mother showed joy, my dad was so proud to have me back on NYSC kits. My family, friends and relatives were daringly happy. I was looking good courtesy of that Kano Camp had actually gotten me re-freshened.

Two  weeks later after the brake, I en routed back to Kano to face the real  deal for NYSC. Kano state is a place where anyone would love to stay. The city is so developed that there is virtually no kind of opportunity that cannot be sourced here. The city of Kano is one that be visited by anyone it  is very cheap and friendly with constant power supply, constant water supply, cheap transportation services plenty of business opportunities to tap into and make plenty of money. Their girls look very decent, quiet and expensive. The assertion that you cannot go close to a Muslim girl and probably ask her out was almost wholly wrong. In Kano, I met a lot of Muslim girls and  made a lot of Muslim girl friends even as a christian. I made lots and lots of visits to them and they repeated same to my place without hitches. (Dont start thinking)

Very funny, I made the greatest mistake of my life after buying potatoes worth N500 but could not finish it in a whole month. Things are so cheap here in Kano that one can use at least N500 to prepare a very nice stew/soup that can last for a period of 5 – 7 days. In Kano, if you are not the rough spender, you can be saving at least 10k from your alawee on a monthly basis and live a moderate life.

On the contrary though, one thing I never liked about the place is that unlike what we have in the South were drinking of beer is normal, I mean my mum could share a beer with me, here, they frown so much at beer/alcohol and to think that they are holy is one big mistake that should be made.

I made so many friends from my CDS group, My work place, my compound and even at the football pitch. Kano became a home to me, I may as matter of fact decide to stay back for one or two businesses due to its commercially friendly atmosphere.

To me, NYSC is never a scam!