The newly appointed Director-General of the National Youth Service Corps (NYSC), Brig.-Gen. Shuaibu Ibrahim, officially assumed duty on Friday as the 18th director general, with a five-point agenda to improve the scheme.

Ibrahim, while receiving the mantle of leadership from the former NYSC boss, Maj.-Gen. Suleiman Kazaure, at the NYSC Headquarters, Abuja, said top on his agenda is utilising the potential of corps members.

The new director general assured corps members that he would continue to build on the successes and achievements of the former director general by continuing to pursue a technologically-driven organisation.

Ibrahim said he would ensure the welfare and security of corps members and staff, adding that while in office, he would strengthen existing collaboration with stakeholders.

The new NYSC chief said that he would restructure NYSC ventures, in line with the NYSC Act. 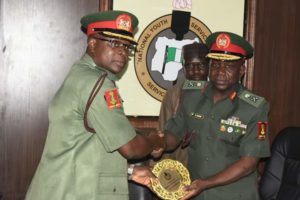 According to him, “It is an honour and privilege that I stand before you here to express my sincere and profound gratitude to God for making today possible.

“My ardent appreciation goes to the President, Commander-in-Chief of the Armed Forces of the Federal Republic of Nigeria, President Muhammadu Buhari, GCFR, Minister of Defence and Chief of Army Staff for finding me worthy to be appointed D-G of this scheme.

“The outgoing director general has done extremely well to have lifted the scheme to a higher level. I want to assure him that I will strive to sustain the achievements and take the scheme to another pedestal.”

The new director general urged the staff to remain committed to work, shun malpractice, corruption and ensure team work and fairness in all activities.

The former director general, in his handover address, thanked the management of the scheme, staff and the media for their cooperation, support and commitment.